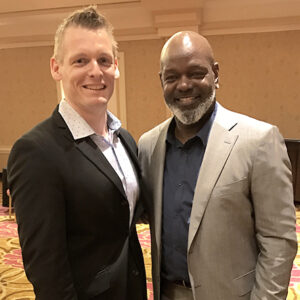 Jeremy Gregg served as a trusted advisor to the Pat & Emmitt Smith Charities.

when you write about yourself

in the third person…

Jeremy Gregg serves as a trusted advisor to the world’s greatest changemakers.

A 3-time TEDx speaker who was previously named the “Nonprofit Communicator of the Year” by the Center for Nonprofit Management, Jeremy spent the first half of his career raising over $40M for local charities that served vulnerable people. As a social entrepreneur, Jeremy co-founded several successful nonprofits and mission-driven businesses (one of which was named the Success Story of the Year by SCORE). Recognized as a Chartered Advisor in Philanthropy® in 2019, Jeremy shifted his career from fundraising to serving as a trusted advisor to philanthropists such as the NFL Hall of Famer Emmitt Smith and leading global nonprofits such The Wikimedia Foundation, the nonprofit that drives Wikipedia.

Jeremy Gregg volunteering in prison with the Prison Entrepreneurship Program.

A passionate advocate for those affected by mass incarceration, Jeremy is also the author of “Daddy’s Time Out,” a children’s book that uses the metaphor of a ‘time out’ to explain incarceration to the 2.7 million kids who have a parent in prison. His second book, “Hunger Bugs Me!,” was a collaboration with the North Texas Food Bank that explained  hunger to children while using a “participatory” framework that elevates the voices of those who experience hunger in addressing their challenges.

In 2020, to expand his reach across the country while deepening his impact, Jeremy joined Arabella Advisors as a Managing Director. Arabella is a mission-driven, Certified B Corporation that has helped hundreds of clients representing more than $4 billion in assets increase their philanthropic impact. Jeremy leads the company’s efforts to provide strategic guidance for effective philanthropy in Texas and across the South.

Prior to joining the company, Jeremy served as the President & Founder of Gregg Partners, an impact advisory firm that developed revenue strategies for nonprofits; and Mission Allies Publishing, a mission marketing agency that distilled a nonprofit’s message into the world’s most accessible, shareable, and durable format — a children’s book. He also previously held C-level roles (including two CEO positions) at a number of charities and social impact ventures, including an internationally recognized leader in prison rehabilitation, a management support organization that delivered training and consulting to other nonprofits, and a community development organization that improved the lives of over 50,000 low-income families per year. For his full professional bio, see LinkedIn.

During the economic downturn of 2008-2009, he also served as the Founding Executive Director of Executives in Action, a nonprofit that leveraged the talents of transitioning corporate leaders to build and strengthen the capacity of hundreds of nonprofits that could never have otherwise tapped such talent.

Jeremy has been featured on the BBC, NPR, the Financial Times, Texas Tribune, the New York Times, Forbes, and more. His published work has appeared in the Wall Street Journal, Huffington Post, StackStreet and in cover articles for an industry magazine.

Jeremy earned an Executive MBA from the University of Texas at Dallas and also holds degrees in both Advertising and English from SMU in Dallas, Texas. He is a CAP (Chartered Advisor in Philanthropy) via the American College of Financial Services, a Certified Mindfulness Teacher from the Dallas Yoga Center, and he previously earned his CFRE (Certified Fund Raising Executive). He serves as the board chair of the My Possibilities Foundation, a board member at My Possibilities, a guest lecturer for The Warden Exchange, and on the Advisory Boards for Space for Humanity, The SETI Institute, and Keep America Beautiful‘s RETREET program.

He previously served as a mentor to several fundraising leaders via AFP Dallas; as a mentor in the Team 22 program; a hospice volunteer with the Visiting Nurses Association; a volunteer advisor to the student newspaper at Cistercian Prep School; and a strategic advisor to the Pat & Emmitt Smith Charities.

Jeremy is also a passionate advocate for poetry (which he has taught everywhere from a prep school to a public school to a prison).

Jeremy splits his time between Dallas and Houston, Texas… which means he mostly lives in a car on I-45.

My Mission
To exponentially multiply the positive impact of my love for our planet and its people, particularly for the most economically and physically vulnerable.

My Vision
To leverage the greatest return on my time, talent, and treasure by investing them in social entrepreneurs and impact-driven institutions.

My Beliefs
The simplest expression is: I believe in the poetry of being.

My understanding of this concept is constantly evolving. One expression of it is in how I see parallels between nature and most of our human concerns, from the way that we manage our individual lives to the way that we lead our businesses/careers to the manner through which we should govern our countries/planet. Another is how I see dance — particularly Ecstatic Dance / The Five Rhythms (see below) — as a helpful metaphor for the phases of our journey through this world, for the stages of a business’s natural cycles, for the manifestation of a nonprofit’s mission, etc.

As an author of mission-driven children’s books, I have also come to believe that every mission begins with a story. In this thinking, I have been shaped heavily by thinkers such as Joseph Campbell and others mentioned below.

Here are some ideas that informed my early career, and which continue to guide me today:

Here are some ideas that inform my life: